The Boat to Lift All Tides

Out on Lake Washington, you hear them in the predawn murk: coaches barking, rowers gasping, sounds as familiar to the morning as the Canada geese that clack above the boys and girls in the boats. In Seattle’s first light, you see the slender crafts cutting through the chop of the lake, oars dipping in strained union.

“Harmony, balance, rhythm,” said the legendary designer of racing shells George Pocock. “There you have it. That’s what life is all about.”

People who go looking for life’s meaning in sports will usually find themselves belly up at the wrong bar, crying over a walk-off homer by the bad guys. The hulk who made the game-saving tackle was bulked up on performance-enhancing drugs. The basketball player who tossed up the buzzer-beater is also a wife-beater. That winning home run was slammed by a man who has shamed the game and all the great names he’s now passing. What meaning is there in corruption? Just that it has the same reach in sports as in politics, law or education. Oh, and the banality. 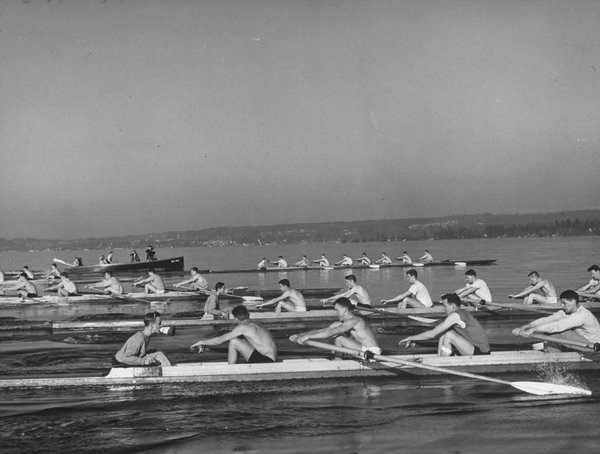 A University of Washington crew practice in 1949; 13 years earlier the school's team went to the Olympics. Credit J. R. Eyerman/The LIFE Picture Collection, via Getty Images
But in crew, the sport of rowing, we may have found something better than the sum of all other games. When Daniel James Brown showed me his galley for “The Boys in the Boat” a few years ago, I was thrilled, but had somewhat modest hopes for his memorable book. Americans don’t watch, or even think about, rowing, one of the oldest of organized human competitions. As for history, well, we like our past-tense narratives filtered through gauze and served with plenty of blood.

But against all odds, Brown’s book has become a global phenomenon. It’s up there in the high reaches of Fifty Shades of What Women Really Want and the latest “killing TK” tome to roll out of the joyless factory of Bill O’Reilly. Hope, this spring, is the enormous audience that has responded to an obscure story about a bunch of scrawny college kids who took on the world in 1936.

“The Boys in the Boat” is about who we used to be. And who we still could be. Like the best history, it’s then and now wow factor is both embarrassing (to the present) and inspiring (to the future).

In a nutshell: The book tells the story of the 1936 University of Washington men’s crew team (full disclosure: I’m a Husky grad), who beat their rival California, then defeated the Ivy League’s top oarsmen, and ultimately prevailed over the best rowers in the world, upsetting Hitler’s choreographed display of German superiority at the 1936 Olympics.

They were nobodies and castoffs, the eight-man crew and a coxswain, sons of loggers and mill workers, farmers and factory hands. The central character, Joe Rantz, had been abandoned by his family and rowed to win back his dignity.

After winning Olympic gold, they went on to lives of dutiful anonymity. They could not be any different from, say, the one-and-dones (college basketball players who leave for vast riches of the pros after their freshman year) who dominate that game.

The class element — blue-collar kids, from a public college, beating the sons of inherited wealth from the finest universities in America and the aristocratic spawn of Europe — is a big part of the story. And so is the dedication of coaches and technicians to their craft. Their boat maker, George Pocock, could see in a cedar tree what Michelangelo saw in a block of marble.

“They reaffirmed the American notion that merit, in the end, outweighs birthright,” says Brown.

Well, yes. But I think it’s more than that. Sure, the underdog won at the Olympics, even after being given the disadvantageous outside lane in a choppy waterway. And the scrappy kids from humble homes showed the scions of wealth — at least during the American phase of the competition — a thing or two about racing. Think of the “Winklevi” brothers, a rowing pair of identical twins, oozing Harvard entitlement and privilege, as portrayed in the film “The Social Network.”

Long before “Boys” made so many people want to row a boat, kids from all backgrounds were finding a lane of opportunity in the youth-crew programs in Seattle. In my neighborhood, I know a girl who got into Princeton, and a boy who got into Cornell, in part because of their ability to move an oar through the water. Instead of playing Little League, they got up every morning in the dark to row on Lake Washington, dreaming of races on the Charles or the Thames.

Crew may not be a metaphor of life, or a microcosm of it, as some of its enthusiasts claim. They point to the solitude, the work ethic, the sublimation of ego — all elements of success.

But there is joy, and something lasting and true, in the distilled essence of what those kids were doing in 1936 — that is, a base competition, a race, to be won by whichever side could endure the most pain in a coordinated burst. “A symphony of motion,” Pocock called it. On water, at least, there was no more beautiful music.